John E Wright is proud to be included in the list of sponsors, of the Nottingham City Winter Wonderland held each year in the Market Square. The event which runs throughout Christmas and New Year is hugely popular with the Nottingham public and attracts visitors and tourists from many other cities.

We were sponsors of the Ice rink, the biggest feature and by far the busiest part of the attraction!  Also busy, were the many concessions, which ranged from vegan burger bars, Christmas craft stalls, a stall selling drinking horns (at least that’s what I think they were!) and the many different bars of course.  The Ice Bar was particularly impressive and the whole setup looked more Chamonix than Chamonix itself!  People of all ages were having a great time and much business was brought into the City Centre.

John E Wright supplied and installed the incredibly vibrant graphics for Ice rink area, which featured prominently when the event was covered by BBC News at 6pm in the week just before Christmas. Tony Barnett MD said “Our lads did a great job working with the council on a project to make us proud of our City.  Everyone I was with really enjoyed themselves.” 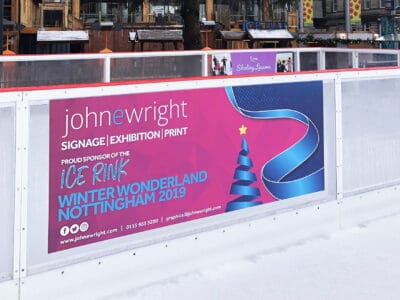